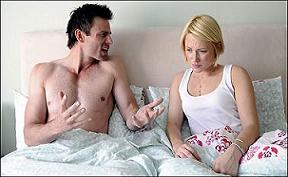 Wow, that's as shocking a title as any, yet this is something that is happening to so many wives as they battle a deadly disease. In a time where they are looking for support, they get anguish.

What ever happened to "until death do you part"?

I cam across this article about husbands having affairs as their wives suffered with breast cancer, and it touched my heart to think of the devastation which must be endured by a cancer stricken wife who knows of their husband's infidelity.

I am curious to know what kind of reaction an article like this may have on others. Dealing with infidelity is hard enough and I couldn't begin to imagine what it must be like to deal with so much pain at one time.

Below is the article about husbands having affairs while their wives battle breast cancer:

Will a Wife's Breast Cancer Lead to Husband's Infidelity?

Author Marc Silver's research into the effect of the disease on marriage has some surprising findings.

October is breast cancer month -- a time to reflect on both the great strides made against the disease and the awful toll it still takes. But in 2008, another sort of breast cancer-related phenomenon is on many minds. In the wake of former Sen. John Edwards' confession of unfaithfulness earlier this year, many people may be wondering: How does a wife's cancer diagnosis affect a marriage?

During the months of research for my book, "Breast Cancer Husband," I heard far too many stories of men who abandoned their wives or cheated after they were diagnosed. Is that the norm? (If so, shame on us!) Or are such stories an aberration? I looked for studies to shed some light.

There's one by neuro-oncologist Michael Glantz, then at the University of Massachusetts, that got a lot of attention when it came out some years ago. Headlines included: "Divorce Rate Higher Among Terminal Cancer Patients." The data didn't quite live up to that.

In Glantz's sample of 193 couples, there were 107 women who had brain cancer and 86 men. He found that 13 husbands walked out on a wife after diagnosis, but only one woman left a cancer-stricken husband. "We can't speak to whether the rate of divorce is greater than, less than, or equal to the rate in the general population," Glantz told me. But he was struck by the fact that a far greater percentage of men walked out on a dying spouse than vice versa. "I was disappointed -- stunned, really," he said.

Of course, that's just one study. Jill Taylor-Brown, director of psychosocial oncology at CancerCare Manitoba in Canada, has also looked at the relationship between cancer and divorce. She examined data on marital satisfaction among two sets of women in Quebec. One group had been diagnosed with breast cancer, the other had not. The women were roughly the same age. The rate of marital dissatisfaction in each group was about the same: 10%. Her message seems to be that most marriages weather the storm.

Yet studies do not tell the full story. Cancer puts a heap of stress on any relationship. One oncologist told me he thinks some men walk out on a newly diagnosed wife because cancer is more than they bargained for when they got married.

Then there are the cheaters. One woman called a cancer help line and said, "I'm in the middle of making dinner for my husband, but I don't know why, because he's having an affair."

The help line counselor asked, "Does he know that you know?" The caller said, "He told me. And he said he won't break it off because if something happens to me, he doesn't want to be alone."

On the other hand, I interviewed women who said their pre-cancer marriage wasn't in the greatest shape -- then the cancer diagnosis caused their husbands to step up in ways they couldn't have imagined. Cancer saved their marriage!

Many women told me, "I couldn't have made it without the support of my husband."

So what does it all mean? Marriage is fragile and unpredictable. Sometimes a wife may think it's in great shape; then along comes cancer and the husband reveals he's not the man she thought he was. As for Edwards, I don't want to play dime-store psychiatrist. The motivations for his cheating are known only to him.

Cheating with another woman, however, isn't the only way to be a bad husband during a breast cancer ordeal. I once met a breast cancer survivor who proudly declared, "After I was diagnosed, I lost 200 pounds." I wanted the details of her diet, but she hadn't dropped any weight. Rather, she had drop-kicked her unhelpful, unsympathetic hubby.

Marc Silver is the author of "Breast Cancer Husband: How to Help Your Wife (and Yourself) Through Diagnosis, Treatment, and Beyond." His marriage survived (and thrived) after his wife's 2001 cancer diagnosis.

"I feel so bad for her! She found out
he was cheating on her shortly after being diagnosed with breast cancer"


Please feel free to share your reaction or feelings to this article with me or with others on this site. I know it is extremely naïve to think that this site will stop others from cheating because I write about it.

However, I will keep holding on to the hope that this site can change even one person’s mind for the better or help to get just one person through their difficult time and if I can accomplish that, then I will consider it a success!

I would love to hear from you!