Even Though I Know the Truth! 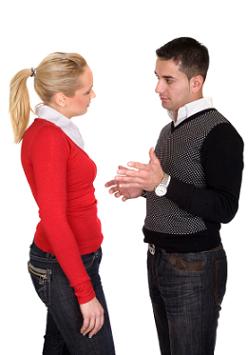 My boyfriend denies cheating despite me knowing the truth. I never really thought that I would be one of the victims of this whole cupid thing. The idea of finding "the one" to be finally "as one" fails to get out of my system, continuously hurting every part of my whole being.

Yes, I have him and for such a long time, I really thought I owned him completely. But all my expectations turned out unreciprocated. He did the most unforgivable move - he cheated on me. I did not believe it, but the evidence speak for themselves but yet my boyfriend denies cheating so I had no choice but to give up.

We were sweethearts for like five to six years already. Like most relationships, we also had our equal share of misunderstandings. But this one, for me, has gone out of limit. It happened the very day I was about to leave for a summer vacation. The time which I thought to be for relaxation turned out to be for healing.

I have this friend (of course by that time, I really consider her as one) from school. We were not close but we were civil. We used to say hello every time we'd bump into each other along the school's lobby. But that was it, and that was how we were. After graduation, I didn't hear much about her.

Let me get it straight. My boyfriend denies cheating and yes, what you are thinking is undeniably right. But, when did it happen? I honestly don't know. How could I possibly know if in the first place? He has neither confirmed nor denied my accusations.

I think, their affair started when we three met at a mall. I properly introduced them to each other. Before we separated ways, she told me her number. The meeting and greeting was so quick for an understanding to start. But my thoughts were wrong.

After that instance, he became so much of a text buddy. He used to be a caller and not a texter. He started to be so possessive with his phone and did not permit anyone, I mean 'anyone', including me, to do some pressing.

Though he did not verbally prohibit me, his actions certainly did. By that time, I knew something was wrong, but did not have the heart to ask him. So I just remained silent.

He also lessened his visits to my house. He usually does it daily, but the daily became thrice a week, until it declined to one. He also continuously missed our dates.

I invited him for a short vacation but he straightaway refused. That appeared to be something strange because he usually goes with us in all of our outings. That's when I have confirmed that something was really going on.

Just when he thought I already left, that's when I started my plans. It may sound ridiculous but I literally followed him the whole day. From the moment he left his house in the morning, until the time he went back, I was with him, from afar.

And what's even more tear-jerking is when every time I call him and ask him where he is, his usual reply would be “at home”. I could not stop my crying while seeing him and my school friend having a good time, but I just said that I just miss him that's why I was crying. Why I did not confront them right at those moments when I have all the evidences? I also don't know.

After all those secret moves I made, I started to question him. For the whole week that he thought I was away, I asked him what he did, and as expected, all his answers were lies.

I asked his permission for me to borrow his phone. I checked the phone's contact list and was surprised to see my high school friend's number registered under a different name. I started to calmly ask him questions, on how he got her number. He said at the mall when we three once met. But why with a different name?

Eventually, I told him the truth that I was not able to make it to the vacation. He was surprised. I told him that I know his whereabouts and who he was with during my fake absences and still my boyfriend denies cheating.

That's when he said he was with my friend, but that was for only one day and that their meeting was by chance and was not really planned. I continued my asking but he took it as pestering.

Our discussion turned into serious exchange of harsh words. I could not take the lies anymore and so I got hold of my bag, went straight to the door and left. That discussion ended up unfinished. After that, we didn't hear about each other for a couple of weeks.

"..and still my boyfriend denies cheating on me"


He tried to call and visit me, still saying that all I saw was not true. Till this day, my boyfriend denies cheating on me. He tried to make contact, left me messages, explaining what really had happened. But for me, I know what to believe and when to let go. And my evidences are more than enough to conclude the whole story.

Return From My Boyfriend Denies Cheating to Cheating Articles